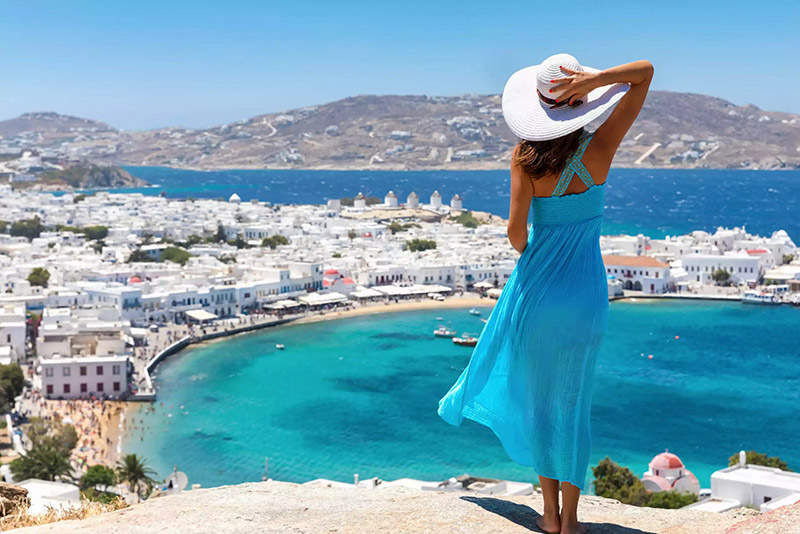 Before planning your next holiday in Mykonos —any time after early April is a great time for a holiday in Greece and especially the Cyclades— maybe you’d like to refresh your knowledge about this amazing island. More than a history lesson, it is a way of understanding its DNA by taking a walk through time.

The story begins with a “conflict” about the name Mykonos. Some say that the word itself means “a mass of stones” — an explanation that fits perfectly to the looks of this rocky, dry island. Others say that Mykonos was the son of the king of Delos, Anios, who in his turn was the son of Apollo, ancient god of music. Kares and Phoenicians were the first inhabitants of Mykonos, before being expelled by the Ionians. Much later, first the Romans and then the Byzantines took over of the poor island, fortifying it against the pirate raids.

In the18th century, Mykonians were acknowledged as skilled sailors and very successful entrepreneurs in trade and shipping. In 1821, during the Greek Revolution against the Ottomans, Mykonos had a great moment when Manto Mavrogenous, an educated aristocrat much influenced by the ideas of the European Enlightment movement, spent her family’s fortune to finance two armed ships and lead the most successful naval battle against the Ottoman fleet.

When the contemporary Greek State was established, the island’s economy started recovering through the efforts of the locals, who revived their trade success story. But the disastrous effects of World War I forced many Greeks, including Mykonians, to migrate abroad, hoping to find a better future for themselves and their families.

Then tourism came and everything changed. Apparently it all started back in 1873, when the French School of Archeology launched an extended excavations’ plan in the neighboring Delos Island that brought to the light of day precious ancient Greek treasures, including the worldwide known temple of Apollo. In fact, the French archeologists who necessarily sailed back every night from the deserted Delos to the much more “civilized” Mykonos, were the first tourists to be seduced by its magical energy, breathtaking beaches and unique atmosphere.

As a result, ever since the early ’30s, the rich and famous European aristocrats, royalties, tycoons, poets, artists and authors started spending their holidays on the “island of the winds”, as it is still called due to the renowned summer meltemi wind that refreshes the Cycladic temperatures. Hence, it didn’t take long before Mykonos turned into a legendary destination that attracts millions of visitors every year, offering them the experience of a lifetime!

Are you ready to live this unique experience? Book your villa in Mykonos before January 31, 2020, and save up to 25% off! Learn more here. 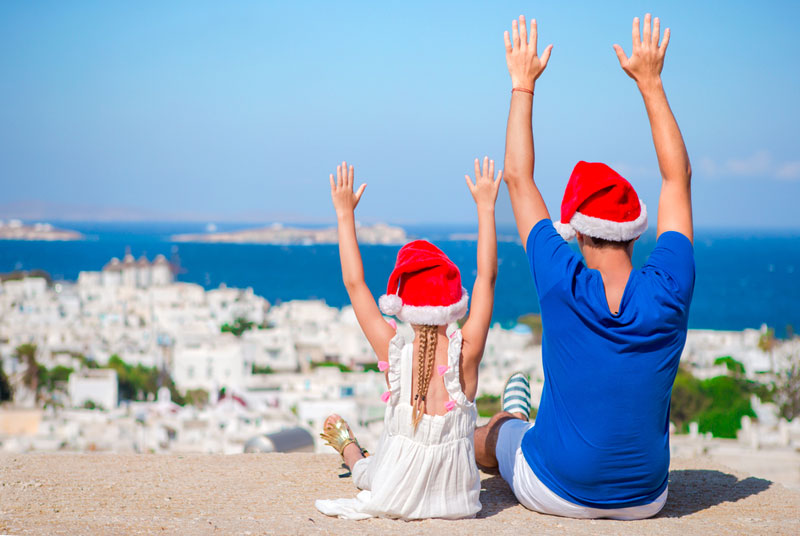 In the morning before the first day of the New Year, hundreds of children alone or in small groups, carrying “childish” musical instruments like harmonicas and little metallic triangles, fly around the narrow alleys of Mykonos town, knocking on every door to sing the carols —known as kalanda in Greece— and be rewarded with home sweets, pocket money and wishes.

It is funny to watch them perform their festive duties, dressed like tiny Santas, with fake snow spread on their shoulders; especially when New Year’s Eve happens to be a warm, sunny day, with skies of brilliant blue and with the dazzling azure sea slightly moving, like repeating its promise for a great summer lying ahead. And warm, sunny winter days are not at all rare in this blessed corner of the world!

For those who are fortunate enough to be spending Xmas and New Year holidays on the beautiful islands of the Cyclades, there is a lot of magic to be discovered: beautiful religious rituals, ancient customs revived, dancing, singing and tasting homemade culinary delicacies like melomakarona (honey cookies), kourabiedes (sugar coated almond cookies) and diples, a festive dessert made from fried dough dipped in honey. There is also the famous Vassilopita, a sweet special cake with a coin baked inside, that will bring good luck to the person who finds it!

But the most spectacular feast of all is the Epiphany, celebrated every year on the 6th of January. It is a ritual through which waters are blessed with the Holy Cross. In seaside areas, the priest throws the Cross in the water and young men dive to recover it. It is believed that he who catches the Holy Cross will be blessed with good luck for the whole year!

And then, from January 7th and onwards, activities on the island change course to include the first ‘official’ preparations for the coming holiday season that is usually inaugurated in April, turning the party spirit on!