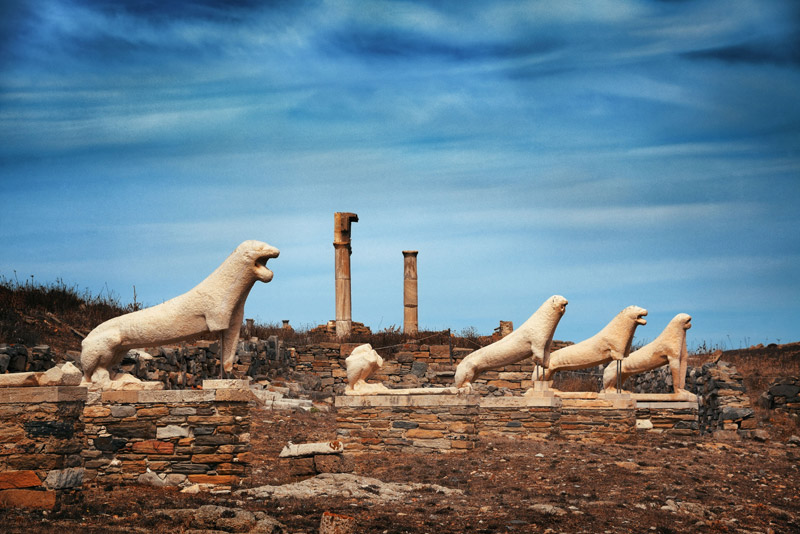 Delos is a tiny island, only a mile and a half away from Mykonos. Famous for its antiquities, it is a quiet rock located in the center of the Cyclades complex, deserted yet visited by thousands of tourists every year.

Unlike its busy, ever-rocking neighbor, in Delos there are no boutiques, restaurants, organized beaches, or night clubs here to entertain travelers; just beautiful seawaters, ancient temples and maybe the most beautiful sunset in the Aegean archipelago!

According to Greek mythology, the island of Delos is where Leto gave birth to Zeus’ twins, Artemis and Apollo. It is a fascinating story where Leto, Zeus’ “mistress”, got pregnant from him, driving Hera, Zeus’s wife, crazily jealous. So, when Leto was about to give birth, Hera ordered all the lands in Greece to refuse shelter to her. Immediately Zeus told Poseidon, ancient god of the seas, to locate a safe, hidden place for her; which he did. When Leto flew away from Athens in despair, she was led to the tiny, rocky island. Here she gave birth to Apollo, later god of music and Artemis, later goddess of hunting.

This is how Delos became “sacred”. Its secret was revealed in the late 19th century by French archaeologists who discovered, among other, many spectacular temples made mostly of marble and even gold. They also discovered breathtaking statues dedicated to Apollo, Artemis, Hera, Zeus, and other ancient gods.

Delos, Then and Now

Being at the heart of the Cyclades, especially in the Mycenaean period Delos was a famous stop for traders. Thus, it gained the fame of a busy, cosmopolitan corner of the Aegean. This was confirmed by the findings of the excavations that included many market areas, a hippodrome, a gymnasium, and a theatre for thousands of spectators.

Today, Delos island remains a fascinating open-air museum, hosting rare antiquities from the Archaic, Classical, and Hellenistic periods. There is also an archaeological museum on the island where one can admire 7 from the maybe 12 marble lions that once stood proudly with their mouths open as if they were roaring. The lions were initially guarding the sacred lake where, according to all these beautiful myths, Apollo was born.

Once in the area, visiting Delos is an absolute must; and very easy too, since it is a just a short boat ride from Mykonos with very frequent connection! Just book a villa to be your base and plan your trip to this magical place.