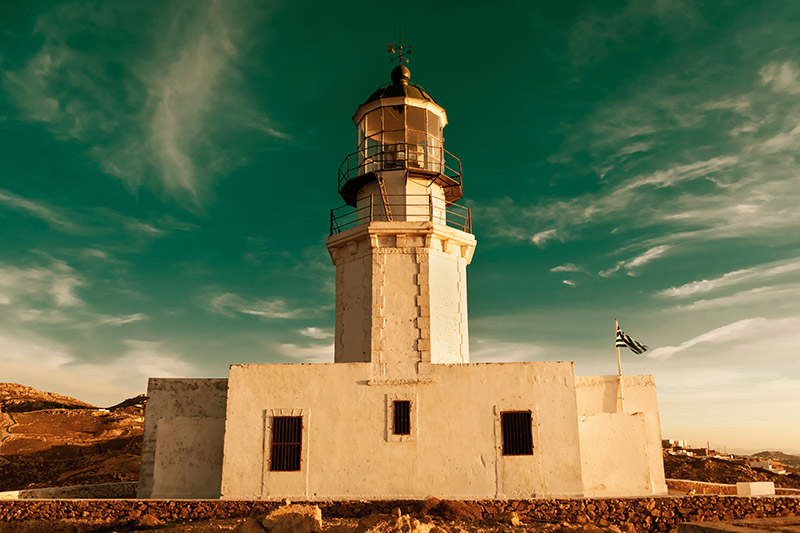 Paying a visit to the imposing Armenistis Lighthouse is a must for everyone traveling in Mykonos — especially if you love taking pictures or videos of stunning sunsets!

A distant beam, randomly flashing among gigantic waves, bringing the promise of a safe harbor or alerting sailors for danger. There is no “sea-novel” or movie that doesn’t include fascinating stories and old legends about ships in storms and brave lighthouse keepers who spent their days and nights helping to save human lives at sea.

The beautiful Aegean archipelago with its fascinating golden beaches and deep blue azure waters is full of such isolated faros, as locals call them; monuments of naval history that have been shedding their guiding light for centuries. Among them, one of the most imposing is the Armenistis Faros (Lighthouse), located about 7km from Mykonos Town, in the “Fanari” area, on the north-western part of the island.

Built in 1891, Armenistis is an octagonal stone tower that stands in full harmony with the traditional Cycladic architecture. Overlooking the sea passage between the islands of Tinos and Mykonos, the lighthouse offers a breathtaking view of the surrounding Aegean Sea that at the specific spot can get pretty rough, due to the meltemi, the strong north-east summer wind. And while, during the summer, the meltemi becomes a natural air-conditioning system that keeps the temperature relatively cool and the air fresh, in the winter the northern winds can become so fierce that smaller boats need to seek for a refuge. Apparently, in 1887, on such a stormy night, the British steamship Volta sunk near the north coast of the Mykonos, leading to the construction of the 19-meter tall Armenistis Lighthouse, with the purpose to help keep ships safe.

Paying a visit to the Armenistis Lighthouse is a must for everyone traveling in Mykonos! Especially if you love taking pictures or videos of stunning sunsets and exquisite sea views, this is the perfect spot. Located in cape Armenistis, close to Agios Stefanos beach, the old historical lighthouse is managed by the Hellenic Navy’s Hydrographic Office and remains in operation. It is worth noting that the mechanism of the original lamp of the lighthouse was made in France and awarded by the International Exhibition of Paris. In 1982, Armenistis was electrified, while the original lantern has found its place in the Aegean Maritime Museum in Mykonos, which is one more reason —among thousands— to book now your villa and visit this rare Cycladic gem!