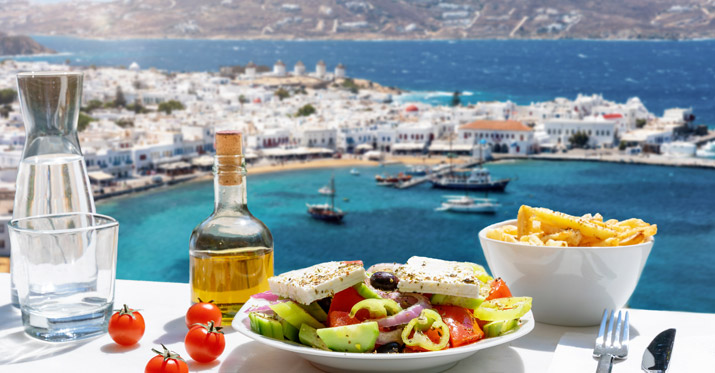 If France in the gastronomy guides means “fondue”, Italy means “pizza” and Germany means “sausages”, then Greece is undoubtedly listed under h for “horiatiki” (Greek salad) or s for “souvlaki”. But that is just the stereotype; for Greek cuisine is much more than the moussaka-souvlaki-and-horiatiki-with-feta cliché!

Take Mykonos for example: there is something more to this amazing island than its fascinating coastline and infamous nightlife. Greece is full of long sandy beaches, azure blue waters, and picturesque whitewashed houses; yet in Mykonos there is a special kind of energy in the air that makes everything look brighter, taste better, feel more exciting.

Foodwise, Mykonos is just the place to try mouthwatering local dishes and delicacies, both in traditional tavernas and high-end, elegant multi-awarded restaurants, either in the main town (Chora) or in villages like Ano Mera. Just make sure that at the end of your stay you will have tasted at least some of the unique products that this earthly paradise has to offer:

No matter what your plans are, don’t miss the chance to taste the local cuisine. And remember: if you stay with us at M Mykonos Villas, you can always ask for a hearty breakfast to kick-start your day or for a private chef to cook for you.

One thing is for sure: in Mykonos, you will never leave your stomach growling! Early March and the vaccination race opens the window to a summer with hopefully less restrictions than those of last year. Accurate predictions are hard to make, of course, but the warm, dry climate of the ever-sunny Cycladic islands adds more hope for an as Covid-free as possible holiday season.

The magical journey to Mykonos starts from the moment the plane starts descending towards the island’s International Airport. Below your feet, the Aegean Sea looks like a cobalt blue carpet, decorated with smaller and bigger rocks spread in a circle. No wonder why this part of the Archipelago is called Cyclades; from the Greek word kyklos that means circle. The islands here form a rough circle around the sacred island of Delos, neighboring to Mykonos, which, according to the myth, was the birthplace of Artemis, ancient goddess of hunting and her brother Apollo, god of music. Once in Mykonos don’t miss the opportunity to take a fascinating daily guided tour there, as it is one of the most important archaeological sites in Greece.

And the “not to miss” list doesn’t end here, for Mykonos hides a paradise in every corner. From the amazing coastline with dozens sandy beaches, where the crystal-clear waters have the most beautiful azure colors you’ve ever seen, to the mouthwatering cuisine and the legendary nightlife, for more than 7 decades Mykonos has been and still is the top international destination for trendsetters and celebrities from around the globe.

You will love it for its most picturesque neighborhoods like Little Venice, its narrow alleys, crowded with boutiques that don’t close before midnight and bars where drinks are being served till early in the morning, when the small, elegant café open their doors. You will love it for the wild parties at the beach bars, the beautiful Byzantine monasteries and the whitewashed chapels “hanging” at the top of dry, rocky cliffs. You will love it for the endless opportunities of having fun by enjoying extreme watersports, yachting, shopping, and feeling like this super exciting place of the earth was made especially for you, to have the time of your life!

Keep in mind, however, that even if you’ve been vaccinated you will still need to take safety precautions — so get ready to pack your masks and hand sanitizers, too! 😷 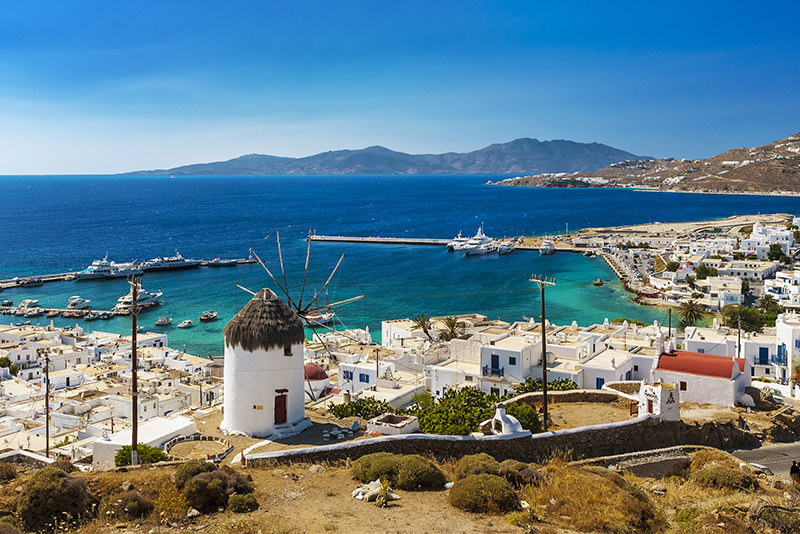 Usually, January, February and March are the coldest months in Greece. Even in the islands of the Cyclades, where the climate is milder than in the northern part of the country, temperatures remain low. There are even a few —not many though— possibilities of snowing!

January and February are two very quiet months; and not only this year, due to the COVID-19 lockdowns all over the world. Especially February is usually the quietest period of the whole year. This month is also called “drunk”, because of its unstable weather and because it marks the time for pruning vines and planting new ones. People often say that when February’s “veins” (underground streams) get filled with water, the air will start smelling like summer!

Under normal circumstances, somewhere between February and March people celebrate the Carnival (“Apokries” in Greek). In Mykonos, like in the rest of the country, celebrations are full of inspiration, including group masquerades, singing, dancing, joking and a lot of wine drinking. The peak of this… foolery comes on Fat Thursday (“Tsiknopempti”), a day when barbecuing is an undisputable must, and then on the last Sunday, also called “Great Carnival Sunday”. The day after, known as Clean Monday, with people traditionally flying kites in the countryside, is the beginning of a 40day Fasting period that will end on Easter day.

Of course, the pandemic that started almost a year ago has changed everything — and all these wonderful traditions are put on ice, until next year.

This is the year to choose optimism

We choose to be optimistic, though; after all, before we even know it, summer smells will start flooding the sky of Mykonos. The first works for the coming season usually begin during the last days of February. The locals become tireless busy bees, whitewashing the walls of their houses, repainting doors, and window shutters, fixing their boats, renovating shops, reequipping the beaches, and preparing for the notorious Mykonian holiday frenzy!

What they hope, along with the rest of the world, is that at the end of the winter the pandemic will start receding, allowing us to gradually retrieve our lives.

By then, Mykonos will be ready to welcome its visitors from all over the planet to show them the irresistible beauties of this rare Aegean diamond; sunny skies, crystal-clear azure-blue waters, golden sandy beaches, a fascinating landscape and an amazing coastline, exceptional food and rocking nightlife and, most of all, the most heartwarming hospitality in a paradise where luxury is a true art!

From all of us at M Mykonos Villas, best wishes for a safe and happy New Year!