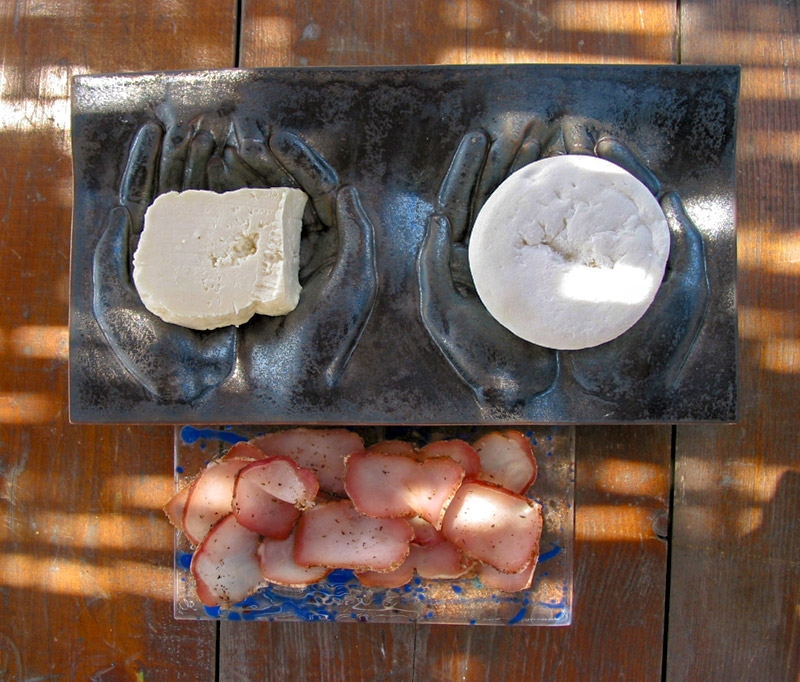 They say that if you want to know where and what to eat in a small place far from home, follow the locals. By getting to know the habits and preferences of the inhabitants in the off-season times, you can have great gourmet insights. A dive in the gastronomic traditions of Mykonos has a lot to reveal!

Mykonos louza and sausages are considered two of the tastiest delicacies of the island. Both made from pork, they have a large content of meat compared to similar cold cuts. The specific way to eat pork in the Cycladic cuisine goes back to the pre-refrigerator era when, after the animal was killed, every part of it would undergo a totally natural preservation process so that it would not go to waste. For louza and sausages the bests parts of the meat are first cured in sea salt, then rolled in local aromatic herbs and spices and finally dried in the strong Aegean wind. Louza is served in very thin slices, like prosciutto. You can find this mouthwatering delicacy from the humblest taverna to the 5-star restaurants in Mykonos and wash its explosive taste away either with ouzo or tsipouro, the traditional rich in alcohol Greek drinks, or with a collector’s aged red wine!

In many Cycladic islands, like Mykonos, pig slaughtering is still celebrated during every autumn as part of a tradition that goes back to the distant past and represents the island’s Dionysiac origins. During the feast, villagers gather to drink, enjoy pork meat dishes, and produce homemade sausages, making sure of their family’s meat supply for the entire year.

Mykonos is famous for its special, spicy, and hot varieties of cheese made of raw goat milk, usually produced in April and May when, climate-wise, it’s apparently the perfect time for making cheese. Kopanisti and xinotyro are aged for many months. The long, complicated making procedure is performed several times until the farmers get the characteristic granular creamy texture and spicy, intense taste that makes both cheeses true delicacies, perfectly matching red sauces and pasta. Xinotyro is a tougher alternative to kopanisti. There is also tyrovolia, a soft white cheese used in most traditional pies that results from the early stages of ‘kopanisti’ making and is therefore much less spicy.

Since milk is scarce throughout the Cyclades, the production of cheese is small and therefore considered a luxury, marked by a PDO (Protected Designation of Origin).

The art of tsipouro making

When, in the 14th century, the Greek Orthodox monks living on Mount Athos tried a different way of making wine by first fermenting and then distilling the grape skin and juice, they had no idea that they created a legend among Greek alcoholic drinks. Tsipouro, with its distinct taste deriving from herbs and spices, is a strong yet pure drink, ideal to accompany the Greek traditional “meze” appetizers. Its distillation procedure takes place from October to December and becomes a celebration, with friends bringing food and sampling the new drink. To this day, many tsipouro distillers use the old methods of making it and guard their secret recipes!